The enigmatic Neil Young has teamed up with Crazy Horse to release his first studio album with them for ten years and his second of the year. Young is clearly in FU mood presenting his listeners first off with the 27 minute long Driftin’ Back, a wistful look back at his life, his regrets that the 60’s generation didn’t change the world and (his latest hobby-horse) the deficiencies of MP3 which starts off with acoustic guitar but soon gets into a great groove peppered with stunning raw electric guitar solos and ending with the reflection he may be a pagan. Even Dylan positions his longer songs further down the track listing.

Young has, famously, given up drugs and booze but instead of making him concise and edgy it seems to have made him contemplative, nostalgic and loud. Stand out track, at least after a couple of listenings, is Ramada Hotel (weighing in at around 16 minutes) about a long-married couple. As well as the heavier side we are familiar with when Young and Crazy Horse team up, the double album ranges from the light and poppy Born in Ontario, the least appealing song to me, to the mass whistleathon at the beginning of Walk Like A Giant (another 16 minute opus). There are two versions of Psychedelic Pill although, to my ears at least, they seem so similar as to beg the question, why?

Like Dylan, this is his 35th studio album but whereas Dylan, whose formative influence on Young is acknowledged on Twisted Road, has become obsessed with death, Young is content to put his life into some kind of perspective. The old fire is there and his guitar style veers from growls and heavy solos with feed-back to soaring blistering assaults on the fretboard while the rest of the band chug along, as if they are egging him on.

At 66 Young seems to have hit another peak in his creativity – perhaps this is what he meant by it being better to burn out than fade away. If this great album is any testament, he is not going to fade away any time soon.

In these straitened financial times the Micawber principle is driving many people’s approach to their financial affairs. You may recall that Mr Micawber’s maxim was that happiness was derived if expenditure was less than income whereas misery pertained if expenditure exceeded income.

As far as insurance is concerned, happiness is achieved if more is recovered by way of a claim than is laid out by way of premium. As mobile phones are deemed to be increasingly indispensible (what did we do twenty years ago when they weren’t available?), insurance companies inevitably have developed policies to cover the handsets against accidental damage. This in turn has prompted an outbreak of Micawberism and a surprising level of ingenuity deployed to try and recover their premiums.

Without wishing to be a killjoy and surpress the creative side of human endeavour, some tips on mobile phone use can be gleaned from the unfortunate experiences of others.

For instance, where would you put your mobile phone when you were assisting a cow deliver its calf? A farmer in Devon had a brain wave – inside the cow’s backside, natch. Imagine his surprise when it disappeared and when it made a reappearance as the centrepiece of a steaming cowpat, it failed to work.

When desperate, you would think that the vibrate feature of your phone could makes an ideal substitute sex toy. Unfortunately, as a woman in her late twenties in Bristol discovered, the phone wasn’t designed for this form of usage and packed up.

Be careful when you go to the toilet as exposure to water and natural waste products can impact the performance of your handset. A 40 year old construction worker had his phone in the back pocket of his trousers, went about his business and flushed the chain, not realising that the phone had fallen in the pan. The phone didn’t flush away but did stop working.

Phones and heat don’t mix. Don’t do what a woman in Nottingham did and include your phone in the mix of a birthday cake you are making. Inevitably, the phone didn’t survive the baking process. And don’t leave your phone in the blast zone of a fireworks display (note the seasonal advice!) as a professional pyrotechnician did. After the display the phone was nowhere to be seen.

Phones are also vulnerable to members of the animal kingdom. A woman had a phone snatched from her hand by a seagull when she was out walking and a monkey at Longleat safari park snatched the phone from a man’s hand whilst he was filming them. The camera feature so prevalent in mobiles did for another chap who tried to film the recent Blur concert at Hyde Park from a tree and got so excited that he dropped the handset. It was never recovered.

Mobiles can make a useful weapon but if you miss your target, as a Liverpool lass did when she threw her phone at her cheating boyfriend, damage to the handset can ensue.

Use your phone safely but if misfortune strikes, stretch your ingenuity! 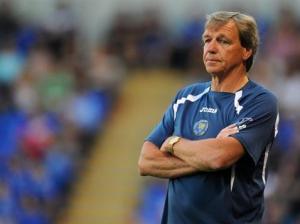 Following what GT described as the most inept performance of his time as manager – the 3-1 home defeat at the hands of Yeovil on Tuesday night – he rang further changes with Jacobson and loanee duo, Helan and Proctor, replacing Wildig, Hall and Gornell, with Richards moving into midfield.

But it was Colchester’s loanees from Arsenal who made the first impression on the game. Eastmond outmuscled Richards in the third minute and scored with a cross-shot with which Weale might have done better. Just after the hour substitute Watt exploited the lack of pace down TMS’ left side and scored a delicious solo goal. GT showed what he thought by hauling off Jacobson and putting on Purdie – so its back to square one. TMS’ fifth home defeat in seven was looming.

GT’s moment of inspiration was to haul off the belaboured Richards and replace him with Hall in the 78th minute. Within five minutes Hall had helped himself to a brace of goals – identical headers from Taylor corners. Taylor might have won the game on but snatched his shot when the goal beckoned and at the death Proctor had a good shout for a penalty.

Midway through the second half it looked all over. At the end of the game supporters were bemoaning the loss of two points. Such is the fickle nature of football. 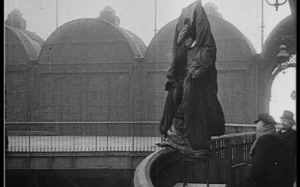 There are but some are too clever for their own good. Step forward (so to speak) Franz Reichelt.

Austrian-born Frenchman, Reichelt, was a tailor by profession but spent most of his free time trying to develop a flying parachute suit. It was intended to be worn by aviators to assist their evacuation from a damaged aircraft. Powered aircraft were a relatively new phenomenon and whilst a lot of thought had been invested in designing how the plane would get off the ground and return to terra firma little thought had been given to ensuring the pilot’s safety.

Reichelt tested his parachute suit using dummies and was sufficiently encouraged by the results to decide to test the suit himself. In February 1912 to considerable media attention including a film crew from Pathe News (http://www.youtube.com/watch?v=FBN3xfGrx_U&feature=player_embedded) Reichelt decided to jump off the lower level of the Eiffel Tower in Paris wearing the suit. You would have thought even he might have had second thoughts when he was balancing precariously on a chair on top of a table on a ledge of the famous Parisian landmark.

Unfortunately and probably unsurprisingly, the suit did not work and the 187 foot fall on to the frozen ground below killed him instantaneously.

One of the (many) things that gets my goat is the proliferation of experts who, at the drop of the hat, inundate us with streams of logorrhea. I blame the rolling 24 hour news culture – everything has to have an explanation and that explanation has to be instant. As Donald Gannon shrewdly observed, the less we know for certain, the more prevalent they are.

Perhaps, though, the Italians have given us a clue as to how to contain and, perhaps even eradicate, this 21st century menace. The jailing of six scientists and a government official in the fall-out of the L’Aquila earthquake in 2009, which killed 309 people, has sent shock waves through the professional expert and consultancy community. They didn’t receive six year custodial sentences for causing the earthquake but for failing to give sufficient warning of the possibility of a major earthquake following a series of minor tremors in the area.

It seems that their evidence led the government official to tell the public that there was no risk and that they should go home, have a glass of wine and relax. It also seems that a local technician, Cassandra like, had been loudly and widely predicting that the big one was on its way.

Curiously, this story broke almost to the day of the 25th anniversary of our own (in)famous pronouncement by BBC weather forecaster, Michael Fish, that rumours of a big storm on its way were poppycock. The next day the population of South East England woke up to survey the consequences of the worst storm to hit the country since 1703. Perhaps Fish would have preferred six years in chokey to having to endure the opprobrium heaped on him over the last quarter of a century.

The Italian hard-line approach to incompetent experts is to be encouraged. I look forward to switching on my TV or picking up my e-paper (I am so on-trend that I don’t sully my hands with newsprint) and not have to endure their endless waffle and hypotheses based upon suppositions and guess work. The world would be a happier place. 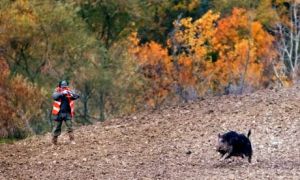 I have always been baffled by the attraction of blood sports. They have always struck me as the last vestiges of primeval man – don’t they know we now have Waitrose and Tesco to satisfy our need for red meat? Even if you are a bit hard up, there is always Aldi. Leave the poor animals alone. I have always been cheered up to hear of stories where the hunter has come unstuck (see below – Dog Shoots Man). What I hadn’t appreciated was what a scene of absolute carnage the Italian hunting scene is.

The statistics are horrifying – since this year’s hunting season in Italy opened in September, 13 people have been killed and 33 wounded. Last weekend’s toll included a 16 year old boy killed by his “friend” whilst out hunting, a pensioner who was shot and wounded in his garden and a cyclist (mistaken for a MAMIL?) hit with grapeshot. The carnage continues on from the 2011 hunting season when 35 (humans) were killed and 74 injured. Under Italian law, shooting parties can go on to private property and fire anywhere provided it is not within 50m of a road or 150m of a house. Of the 2011 bag, 13 of the injured were innocently out for a walk in the woods or on their bicycles.

The number of active hunters in Italy has reduced significantly from around two million thirty years ago to about 700,000 today – perhaps as a result of a too enthusiastic self-regulatory regime. Most extant practitioners are aged between 65 and 78. Perhaps it is the pastime of choice for retired mafiosi. It is tempting to speculate that the carnage is caused entirely by pumped-up myopic sextagenarians.

I have always fancied a walking holiday in the Tuscany countryside but now I’m not so sure. Still, at least the pressure is off the wildlife.

windowthroughtime
Create a free website or blog at WordPress.com.