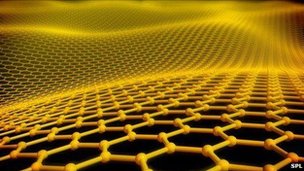 It seems as though our illustrious Chancellor is going to loosen his purse strings and give a grant of up to £21.5m to aid in the commercialisation of a new “wonder material” called graphene. Graphene was discovered in 2005. Manchester University academics Andre Geim and Konstantin Novoselov were awarded the 2010 Nobel Prize for Physics for isolating the material and measuring its properties.

Graphene is sheets of carbon just one atom thick. It’s properties are impressive – it is completely transparent and conducts heat and electricity far more efficiently than any other previous technology. It is said to be up to 200 times harder than steel but is lightweight. Graphene can stretch up to 20 per cent and is anti-bacterial.

But it is tricky to work with – material so thin is difficult to isolate, manipulate and connect to other materials. The challenge is to do so in a way that makes graphene commercially viable as a material.

There have been numerous examples of “wonder materials” which have failed to meet the commercial test. High-temperature superconductors, which won their discoverers a Nobel in 1987, were supposed to give us power lines which would not lose energy and carbon nanotubes (discovered in 1991) were predicted to transform microelectronics. Neither has happened – mainly because they have proven to be difficult to work with in a way that makes them economic to replace existing materials. Whether this will be the fate that awaits graphene only time will tell.

As the country grapples to recover from recession, at least it is encouraging that some money is being found to try and give our scientific community the opportunity to steal a march on others.