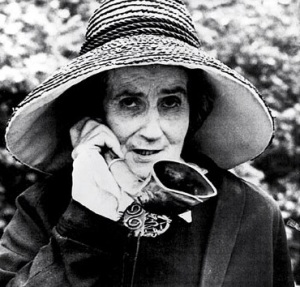 The Swiss get a pretty bad press. They are considered to be uber-boring, solid, reliable, conservative, up for a bit of crossbow practice every now and again and prone to exploit the economic vacuum caused by their bellicose neighbours. Not stupid but deadly dull. Seen in this light, perhaps being an eccentric in Switzerland is not a particularly challenging accomplishment. But by any nation’s standards Madame de Meuron, as Louise was known as, was up there with the best.

She was a member of the Swiss aristocracy, inheriting Amsoldingen castle from her father, Ludwig von Tscharner, and Rumligen Castle, which became her main residence in later years, from her mother, Anna von Wattenwyl. Added to that she owned a number of houses in the old part of Bern and her estate included some Alpine meadowland. But breeding and pots of money do not necessarily guarantee happiness. Louise’s parents refused her permission to marry the love of her life and she had to make do with her cousin, Frederic-Alphonse de Meuron, whom she married in 1905. The marriage ended in divorce in 1923, leaving Louise with a son and a daughter.

We are beginning to see a bit of a trend with eccentrics, namely that there is some traumatic event which prompts the descent into bizarre and unusual behaviour. In Louise’s case, it was the tragic death of her son in 1939 – he committed suicide. Thereafter, she cut what can only be described as a bit of a dash, wearing full mourning dress for the rest of her life including old-fashioned widow’s weeds and sporting a walking cane and a rather splendid, highly decorated ear-trumpet. When asked why she carried it, de Meuron retorted, “so that I hear only what I want to hear” – a privilege available only to the hard of hearing. The striking spectacle on the Bernese streets was completed by her ever—resent pack of Russian greyhounds.

Louise was conscious of her aristocratic breeding and considered that with it went a lot of privileges that the great unwashed could only aspire to. She was above those petty laws and customs which make life a trial for us. She would order her servants to park her car anywhere she wanted to. When an officer of the law had the audacity to suggest that it be moved, she would state in no uncertain terms, “that stays here.” When she deigned to grace the tram system with her presence, Louise would not entertain buying a ticket. After all, she explained, “I was here before the tram.”

There was one occasion, though, where she wasn’t quite able to rise above the law. Louise caught a vagrant woman who had the audacity to steal some fruit from the grounds of her castle and taking matters into her own hands, locked the unfortunate woman in the coach house for a couple of days. Louise was up before the beak on a charge of false imprisonment but in her defence, produced a document dating from the Middle Ages which gave owners of Rumligen Castle the right to administer justice for petty misdemeanours. She was let off with a small fine and a lecture about modern justice and legal practices.

Heaven help you if you tried to sit in her church pew. One farmer had the audacity to do this. Louise put him straight by saying, “Up in heaven we will all be equal, but in the meantime down here, we’ll have some discipline.” Quite. And she had a rather disarming habit of asking total strangers, “are you someone or do you get a salary?” By Swiss standards, as I say, she was quite an odd ball.

2 thoughts on “Everything Is Possible For An Eccentric, Especially When He Is English – Part Sixteen”