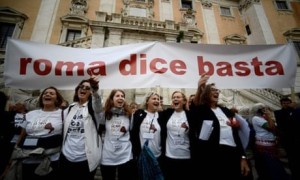 I’m not normally one for fancy dress but I was looking forward to a trip to Rome as an excuse to liberate my leather centurion’s breastplate and toga from the stygian depths of our attic. But it seems I have missed my chance.

The authorities in Rome have just issued a slew of rules aimed at clamping down on what they consider to be uncouth behaviour. Dressing up as a Roman (ancient, that is) is now verboten as is what they term as messy eating in front of historic sites. Whether you will get a spell in what the Italians call al fresco or just a flea in your ear for eating a pizza or ice cream in the open outside some pile or other is not clear.

Other infractions on Roman sensibilities that are now beyond the pale include dragging wheeled suitcases and buggies up and down historic staircases, walking around bare-chested (all sexes, I assume), singing on public transport, and wrapping your mouth around the nozzles of the city’s drinking fountains. And if you must do your laundry, don’t hang it out in the space between buildings.

I suppose, as St Augustine wrote in around 390 CE to Januarius, it is a case of “Romanum venio, ieiuno Sabbato; hic sum, non ieiuno” which has been (very) loosely translated as when in Rome, do as the Romans do. Or perhaps the Stooges got it right; “No fun, babe, no fun”.