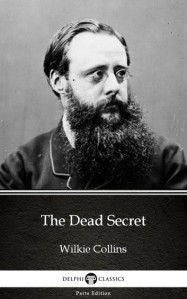 If you have been following these book reviews with even a scintilla of interest, you would have worked out that I am a fan of Wilkie Collins. This is his fourth book, originally serialised in 1856 in Charles Dickens’ publication, Household Words, and in book form the same year. Whilst even his most fervent advocates would not place it amongst his best, some rather churlishly call it the last of his apprentice novels before he wrote his acclaimed masterpiece, The Woman in White, it is a lovely story and a book which has endured in popularity.

The secret, the contents of which are disclosed to the reader early on but not to all the characters, is to do with the true identity of the leading protagonist of the story, Rosamond Treverton. The dying Mrs Treverton entrusted her maid, the scatty and possibly deranged Sarah Leeson, with a letter containing a deathbed confession to pass on to her husband, Captain Treverton. Sarah can’t bring herself to do it and hides the letter in the Myrtle Room, a room in a deserted wing of a Cornish gothic house, Porthgenna Tower. The story concerns the unravelling of the secret, the impact of which could affect the fortunes of some of the protagonists. I will not spoil the story as it is entertaining.

Along the way we meet a wonderful array of characters. Some are there purely for comedic effect like the dyspeptic Mr Phippens who would not be out of place in the pages of a Dickens’ novel. When a little girl is offered an extra slice of bread and marmalade at breakfast, the martyr to his intestines warns, “think of Mr Phippen’s clogged apparatus – and say No thank you next time”. Then at Porthgenna Tower we meet the comedy duo, the butler, Mr Munder, who “has a great reputation for wisdom without the trouble of saying or doing anything to deserve it” and his side-kick, the housekeeper, Mrs Pentreath. The misanthropic Andrew Treverton, the self-styled Timon of London, and his servant, Shrowl, are wonderfully drawn and add a layer of gothic horror to the tale, even if the former’s Damascene conversion at the end is a little out of character and a tad melodramatic for my taste.

Collins’ portrayal of Sarah Leeson’s uncle, Uncle Joseph, engaging. As is his wont Collins introduces a character with a disability, Leonard Franklin, Rosamond’s husband, is blind, and by Victorian standards his portrayal is sympathetic and free from any cloying sentimentality. Although a relatively minor character, he is Rosamond’s rock and fount of all knowledge, she wishing at one point that she could give him her eyes as he is cleverer than she.

Collins’ strength, though, is his understanding and portrayal of female characters. Sarah Leeson is melancholy and tormented with good reason and her character is portrayed with feeling. It would have been too easy to make her into a figure of evil but the writer shows great understanding of the crisis of conscience that made her act in the way she did, notwithstanding the consequences. The pairing of Rosamond with her blind husband is inspired. It means that standard Victorian portrayal of the dynamics of a marriage where the man is the protector and the woman the weak dependent is turned on its head.

The book is written in an engaging style and the reader is anxious to follow the twists and turns of the narrative. As with most sensation novels of the period the plot turns on coincidences, many of which are so far-fetched as to defy credulity. But you have to ride with it, suspend belief and keep going. If you do, you will find you have read an entertaining novel, the popularity of which through the ages is not difficult to understand.