When I stop to consider how much I have spent on gin over the years, to paraphrase P. G. Wodehouse, I become white and shaken, like a dry martini. I blame my classical education. As a child I suffered from asthma. Whilst researching ancient herbalism I came across Pedanius Dioscorides’ De Materia Medica from around 70CE, in which he described the Romans using juniper berries steeped in wine as a way of warding off chest complaints. I started drinking gin and my asthma disappeared. Coincidence? I think not.

It is a misconception to think that what I call the ginaissance, the astonishing return to popularity of gin and the explosion in the number of distillers over the last decade, is a purely British phenomenon. Whilst the UK’s consumption of gin, in revenue terms, accounts for a quarter of the global total and it now exports more gin than it does beef, the spirit is increasing in popularity around the world with the market expected to grow by 4.4% per annum over the next five years. As in the UK there are distilleries popping up around the world, seeking to introduce their take on the spirit and to challenge the hegemony of the big distillers. Vancouver in British Columbia is no different.

Granville Island, on the other side of False Creek from downtown Vancouver, is a vibrant place to visit. Think of Borough market with arts facilities and shops. It is also home to The Liberty Distillery. Their name reflects the opportunity that changes in the law in British Columbia gave artisan distillers to strut their stuff, much as it did in the UK. 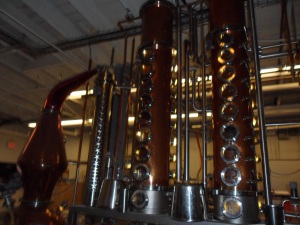 The bar area affords an excellent view of the two copper pot stills, 140 and 220 litres respectively in capacity and with a direct steam heating system, and the labyrinth of pipework which makes the production of the spirit possible. Liberty had four gins on offer and I decided I had to try them all, courtesy of their Gin Flight, a sample tray.

First up was Endeavour Gin which, I was told, used an organic triple-distilled, British Columbia wheat spirit as its base. Ten botanicals, all selected for their oil content, were then infused into the base during the re-distillation process. My personal preference in a gin is one that is heavily juniper led and this one really hit the spot. When I held the glass to my nose the aroma was an enticing mix of juniper, citrus, and floral elements. I was not disappointed with the taste, a hit of juniper to begin with followed by hints of citrus and pepper. The aftertaste was long and lingering with definite hints of liquorice and spiced pepper. It made for a smooth, intriguing drink whether tasted neat or with a mixer and at a moreish 45% ABV was a definite hit with me.

I have also developed a taste for Old Tom gins but Endeavour Old Tom Gin comes with a bit of a twist. Taking the Endeavour gin as its starting point it undergoes a further maceration process with an additional five botanicals and is then laid to rest for a few months in 220-litre French Oak barrels. The result is that instead of the sweeter note that I tend to associate with Old Toms it has a woody, almost whisky-like taste. Liberty say it is a gin for whisky drinkers. I say each should stick to their own.

A temptation some small distillers cannot resist is to throw as many botanicals into the mix as they can, a strange form of alchemy. Whilst it shows a degree of skill to come up with something drinkable, the toper is left wondering whether it was worth all the effort. Often, I feel with gins, less is more. Endeavour Origins uses 25 local botanicals which are slowly infused into the mix. It was surprisingly smooth drink with a complex interplay of sweetness and spice above a solid juniper base with a lingering, slightly minty aftertaste.

It takes a lot to convince me of the merits of flavoured gins. The fourth Liberty offering was Endeavour Pink Gin, which uses 18 botanicals in an organic wheat spirit. The botanicals are specifically chosen to give the spirit a natural rosy hue. On the nose it had intense floral notes and in the mouth was surprisingly powerful, it comes in at 47% ABV, with the juniper providing a solid base against which the more floral notes can shine. I was pleasantly surprised by this one.

The only downside is that, as I write, Liberty gins are not available in the UK. There is surely an opportunity for an enterprising wholesaler there or, alternatively, an excuse for a trip to Vancouver.

Until the next time, cheers!