To my (fairly) certain knowledge I had only read one of Huxley’s works, Brave New World (natch), so I was intrigued to find Crome Yellow in one of those collections of great works of literature you must read before you peg it.

Published in 1921, it was Huxley’s first novel and established his reputation on the literary scene. Critics may say it is much ado about nothing, there is very little in the way of plot or action, and it follows a well-established literary trope of incarcerating half a dozen disparate souls in a country house, the eponymous Crome Yellow, for a long weekend chez Wimbush.

Our guide through the weekend is Denis Stone, a poet, who spends his time pursuing his unrequited love for his host’s niece, Anne, pontificating on matters philosophical and composing, buffing and polishing lines of verse. The book ends when he returns to London, thwarted in his amatory pursuits.

One of the highlights of the book is the beauty of its language. There are many elegantly fashioned phrases to be found on every page, as the author mirrors Denis’ desire to find the mot juste for every occasion. It is a joy to read and anyone thinking about writing seriously would do well to just immerse themselves in the wonder and glory of Huxley’s craftmanship, perhaps heightened by the dearth of content.

Of course, the aspiring logophile that is Denis Stone can get things disastrously wrong. One of the funniest passages in the book is when it eventually dawns upon him that the word carminative, which he chose to describe the sensations caused by love, means something altogether different from the warm sensation of liquid cinnamon trickling down your throat gives. As well as being funny, it is a wonderful illustration of the poignancy of a young person coming to terms with their linguistic inadequacies.

I particularly liked the pessimistic philosopher, Mr Scogan. His rather dystopian vision of the future provides a hint of some of the themes that Huxley explored to good effect ten years later in Brave New World. Scogan also has a set piece in which he expounds upon the futility of taking a holiday to get away from it all, given that we are imprisoned by our selves and social mores. He contends that “metaphorically, we never get farther than Southend”, an image he picks up again when he comments on Gombould’s comment, the rather louche painter, on the First World War being rather like a holiday; “Yes, the war was something like a holiday. It was a step beyond Southend; it was Weston-super-Mare; it was almost Ilfracombe.”

Perhaps the funniest passage is Henry Wimbush’s narrative of the life and times of an earlier owner of Crome, the diminutive and ill-named Sir Hercules Lapith. The tale has Swiftian overtones, the lord of the manor constructing a home and recruiting a retinue of retainers in sync with his small stature. He even married a tiny wife and amused himself by hunting rabbits with a “pack of thirty black and fawn-coloured pugs.” Alas, his son, Ferdinando was of normal stature and Sir Hercules’ oasis of dwarfism was ruined when his uncouth son returned to impose his Brobdingnagian values.

I enjoyed the book, although many of the side plots such as the relationship between Anne and Gombauld and whether Mary realises her suxual yearnings remain unresolved. An underdeveloped character, the hard of hearing Jenny, scribbles away in a red book which Denis sneaks a look at, discovers how others perceive him and draws the wrong conclusion.

I’m not sure I would class it as a masterpiece, being very much of its time, but it is an interesting insight into the development of a notable 20th century writer.

The keys to success in quackery are to come up with something that “cures” a multitude of complaints, advertise the bejeebers out of it and sit back and wait for the money to roll in. If you can extend the panacea’s remit to include the animal kingdom, so much the better. This was the route adopted by the purveyors of George W Merchant’s Gargling Oil and it served them in good stead for almost a century.

The liniment, launched on the unsuspecting American public in 1833, was intended to cure burns, scalds, flesh wounds, a bad back, piles, tooth ache, sore throats, chilblains and chapped hands. According to the adverts “Merchant’s Gargling Oil is a diffusible stimulant and carminative” – so you could use it to deal with flatulence. – “It can be taken internally when such a remedy is indicated, and is a good substitute for pain killers, cordials and anodynes. For Cramps or Spasms of the Stomach, Colic, Asthma, or Internal Pain, the dose may be from fifteen to twenty drops, on sugar, or mixed with syrup in any convenient form, and repeated at intervals of three to six hours.” 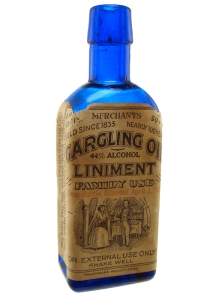 The first thing to note is that despite its name it could be applied externally as well as internally. Secondly, it was marketed as good for animals as well as Homo sapiens. Apparently, horses went mad for it. Initially, there was just one version of the liniment but from the 1870s there were two distinct versions – in yellow for animals and in a lighter colour for humans. Never mind if you could only get your hands on the animal version, you could still use it.  The ads did warn, though, “it will stain and discolour the skin, but not permanently.”

The Gargling Oil made extensive use of advertising. As well as the standard newspaper ads, there were almanacs, song books and stamps. In the 1870s Darwin’s evolutionary theories and the suggestion that man descended from apes was causing waves. Disraeli noted “Is man an ape or an angel? My Lord, I am on the side of the angels. I repudiate with indignation and abhorrence these new-fangled theories.” The stushie was too good for the copywriters for Merchant’s Gargling Oil to miss and they ran a series of ads featuring an ape with the quatrain, “If I am Darwin’s grandpapa/ It follows don’t you see/ that what is good for man or beast/ is doubly good for me.”

So what was in it and was it any good? The former is the easier question to answer as the adverts were unusually forthcoming. It was a mix of petroleum, soap, ammonia water, oil of amber, iodine tincture, benzene and water. It is hard to imagine what possessed Merchant to knock up this concoction but as it must have tasted awful, the instruction to take it with sugar must have been very welcome.

As to its efficacy, it is not clear. It would have been messy to apply and the petroleum base may have been off-putting but it evaded the attentions of the Food and Drug Association. What did for it was a serious fire at the Merchant factory in Lockport in New York in 1928 which completely destroyed the building – I wonder if the Gargling Oil was flammable? – and it was so destructive that the company never got back on its feet again. It did leave us, though, with some wonderful adverts.