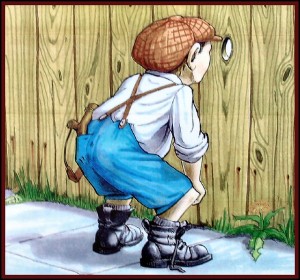 A nosey parker is someone who cannot resist the opportunity to stick their nose into other people’s business, someone who is overly inquisitive or likes to pry. But where does it come from and was there a historical nosey parker?

In etymological terms it is a fairly modern phrase, first appearing in a story published in the Belgravia: A London Magazine in May 1890 entitled Eastward Ho! by E Hesse-Kaye. The narrator, who hails from the West End of London makes an intrepid expedition into the Badlands of the east, notably Shoreditch and Hoxton. Part of the article is devoted to recording the scraps of conversation he overhears. In one of the exchanges he hears, “lookey ‘ere, Mr Poll Pry, you’re a askin’ too many questions for me, there’s too much of Mr Nosey Parker about you”.

That it was well established in the vernacular of London folk seems to be confirmed by one of those court cases that make local newspapers a treasure trove of social insights. In its edition of October 21, 1896 the Daily News reported a case which had troubled the beak at Southwark police court involving a certain Elizabeth Waddell, described as “a determined-looking woman” who was accused of smashing up a barrow load of toys. In her defence, Waddell is reported as saying, “if the complainant had not been such a Nosey Parker, she would have escaped the row”.

Not unsurprisingly, when we look at the development of the meaning of nosey, we find that it was used at least from the seventeenth century to describe someone with a large nose. Thomas Shelton undertook the enormous task of translating Cervantes’ Don Quixote into English, a feat he achieved in 1620. In one passage, he wrote “the story leaves them, to tell who was the Knight of the Glasses and his nosier Squire”. Although not clear in excerpt form, the context shows that the adjective was used to describe a physical attribute of the squire, not where he stuck it.

It was not until the early nineteenth century that the word began to be used in a more figurative sense, to suggest that the nose was used to pry into matters not necessarily concerning the bearer of the snout. This transition in meaning can be seen in Robert Montgomery’s satire of 1828, The Age Reviewed, in which he writes, “the sycophantic gang Whine through the kingdom with deceitful slang; Till nasty, nosy gabble mouth’d for hire, Puff their mean souls into Presumption’s fire”.

The other component of the phrase had a rather literal meaning, a parker was someone who looked after a park. One of the temptations or occupational hazards of the job may have been inadvertently, or deliberately, observing a person or persons unknown getting up to no good. But this perk of the job is not necessarily the origin of our phrase but it does attract me.

It almost certainly not a reference to the sixteenth century Archbishop of Canterbury, Matthew Parker. We have illustrations of him and whilst he has a fine snout, it is not particularly prominent and, in any event, he was not known for being particularly inquisitive. The gap of four centuries, even allowing for it to be in oral use before it made its way into print, tends to argue against him as the phrase’s origin. There was a postcard from 1907 entitled The Adventure of Nosey Parker but this appeared after the first recorded use of the phrase.

As is often the way, there is no definitive answer to our conundrum but I do like the image of an inquisitive park attendant. 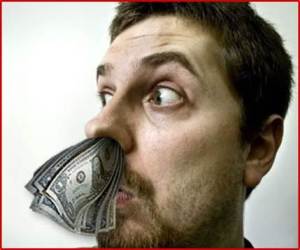 Pay through the nose

We all like a bargain. There is nothing worse than when you have handed over your hard-earned cash to buy the object of your desires, you find that you could have got it cheaper elsewhere. If you find that you have paid a considerable amount more, you might consider you have paid through the nose. We use this phrase to convey the sense of paying excessively for something or to be charged exorbitantly but where does it come from?

Probably where it doesn’t come from, contrary to popular opinion, is the novel approach to tax collecting adopted by the Danes in Ireland in the 9th century. Anyone who refused to meet their demands met with a gruesome punishment, their nose was slit. Whether this actually happened or not is one thing, the other is that there is an unexplained gap of around eight centuries before the phrase made its appearance in print and, in any case, you might have expected a reference to the slitting of the nose.

Our old friend, the anonymous B E Gent, defined the term for us in his invaluable A New Dictionary of the Terms Ancient and Modern of the Canting Crew from 1699, as to pay “excessively, or with Extortion”. That it was in common parlance, not just amongst the lower orders characterised by the canting crew, can be seen from this reference in the anti-Papist tract, The rehearsal transpos’d, of politician, Andrew Marvell, published in 1672; “The Fanatiks had bought it all up,, and made them pay for it most unconscionably, and through the Nose”.

There is an even earlier usage to be found in the translation of Giovanni Torriano’s A common place of Italian proverbs and proverbial phrases digested in alphabetical order from 1666. There he noted, “oft-times Rich men engrossing commodities, will make one pay through the nose, whereas they might sell the cheaper”. Nothing ever changes, not least the meaning of our phrase.

There were some earlier variants which featured the phrase through the nose. To bore someone through the nose was to deceive them. In Cervantes’ last novel, The Travels of Persiles and Sigismunda, translated into English in 1619, a couple of princes, dressed as poor pilgrims, are bargaining with a painter. The governor of Rome becomes suspicious of the trade and intervenes. The result – “the painter was bored through the nose, seeing his hopes vanished, the chains in another man’s hands than his own, and his portrait in the justice’s hands”.

The Brits have always been suspicious of foreigners and their ways. In 1642 the historian, James Howell, made his particular contribution to the nation’s xenophobia by writing Instructions for Forreine Travel. It is full of advice and cautionary tales for the traveller. In warning against overpaying, Howell sagely remarks, “I have known divers Dutch Gentlemen grossly guld by this cheat, and som English bor’d also through the nose this way, by paying excessive prices for them”.

The playwright, John Fletcher, used a variant in his play, The Night Walker or the Little Thief, published posthumously in 1640; “But I’ll take my order she shall ne’er recover to bore my nose”. He was taken by nose because in his comedy, The Woman’s Prize, from around 1611, he gives one of his characters the lines, “but when I have done all this, and think it duty/ Is’t requisite another bore my nostrils?/ Riddle me that!” A parody of a church service, A Lenten Letany, by John Cleveland, published, perhaps sensibly, posthumously in 1662 contains another variant; “that it may please thee to suppose/ our actions are as good as those/ that gull the People through the Nose”.

It is quite clear that in the seventeenth century the use of the phrase through the nose in a variety of forms was indicative of someone being tricked or cheated. Paying through the nose fits that formula to a tee. There is no need to think it has a reference to the tax collecting methods of Danes whose activities if known at the time were form a distant past. It is more likely to owe its origin to the custom of attaching nose rings to large domestic beasts by which to lead them around and divert them from doing what they would have preferred to have done.