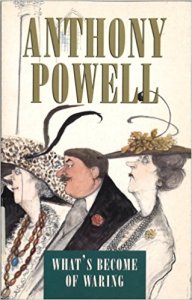 To paraphrase Nick Jenkins, I was at that time of life when I had read Dance to the Music of Time twice and so I decided I ought to explore some of Powell’s earlier works. I chose What’s become of Waring (WBoW) which was Powell’s fifth novel, published in 1939 on the eve of the outbreak of the Second World War. Timing is everything and this rather put a dent in his sales.

The title comes from Robert Browning’s poem, Waring; “What’s become of Waring/ since he gave us all the slip/ chose land-travel or seafaring/ boots and chest or staff and scrip,/ rather than pace up and down/ any longer London town?” And that pretty much describes the novel which centres around the disappearance of an elusive travel writer, TT Waring, presumed dead, and the attempts to unravel who he was, what happened to him and why. Although there are certainly elements within the book of the classic mystery, the plot containing the statutory number of twists and turns to keep the reader on the edge of their seat, it works on more than one level. It is a light, well-written book which engages the reader so that they want to go on and also takes a gentle satirical jab at the pretensions of 1930s London society.

Rather like Dance to the Music of Time, the book is narrated in the first person, although unlike Nick Jenkins, the narrator here is anonymous. The use of a narrator allows Powell to show off his virtuosity because often he creates a void between what the narrator understands and what the reader has deduced, allowing the reader to feel superior because they have access to knowledge that the rather blinkered narrator has failed to grasp. The effect is carried off with aplomb.

I suppose it is wrong to judge a book with the benefit of hindsight but WBoW struck me as a dry run for the more substantial, in all senses, work that is the Dance sequence. As well as the use of a narrator, the book is set firmly in the world of publishing and literature. The narrator works for a firm of publishers, Judkins and Judkins, whose prime asset is Waring. Powell sends up literary types, particularly precious and mediocre authors, has the obligatory flighty woman – there is too much of Pamela Flitton in Roberta Payne to be a coincidence – and delights in the eccentricities of the bohemian set. Two séances, one towards the beginning of the novel and the other towards the end, have a significant impact on the story’s development. Powell is definitely sharpening up his craft to good effect.

Of course, the contemporary reading public did not have this sense of where Powell’s literary career was heading and so would judge the book on its merits. Using that perspective, it is a light, undemanding, amusing entertainment which could keep you cheerfully amused for a couple of evenings. My only disappointment was that I had worked out who Waring was early on.

On a more parochial note, part of the story centres around the Camberley area near to where Blogger Towers is situated. Powell clearly was not impressed with the place. “Some of the land showed traces of heath fires, charred roots and stones lying about on the blackened ground. Walking there was not at all like being in the country. Agriculture seemed as remote as in a London street. This waste land might have been some walled-in space in the suburbs where business men practised golfstrokes; or the corner of a cinema studio used for shooting wilderness scenes. It had neither memories of the past nor hope for the future.” It’s changed a bit now, I can assure you!