On the map Holborn Circus looks like a circle from which five roads radiate out. At the north-eastern point lies Charterhouse Street and on its northern side is to be found Ely Place, a road which, in truth, leads nowhere. Its other curiosity is that whilst undeniably right in the heart of London physically, administratively for centuries it was outwith the City of London’s jurisdiction and even today has its own gatehouse and beadles.

The reason for its peculiar status was that it was the London residence of the Bishop of Ely. In 1290, when the then Bishop, John de Kirkeby, left this earth to meet his maker, he bequeathed to his successors a plot of land and nine cottages in Holborn upon which to build a residence “suitable to their rank”. His immediate successor built a chapel to St Ethelreda who founded the first religious house in Ely in the 7th century and to whom Ely Cathedral was dedicated. It still stands, remarkably surviving the Great Fire of 1666 although it was badly damaged in the air raids of the Second World War, one of London’s few surviving buildings from the reign of Edward I.

John de Hotham, Bishop of Ely during the reign of Edward III, added a vineyard, kitchen-garden, orchard and generally finished off the Palace such that it was described by the 16th century antiquarian, William Camden, as “well beseeming for bishops to live in”. Arundel, later to become the Archbishop of Canterbury, erected a large and handsome “gate-house or front” looking towards Holborn. It still stood when John Stow compiled his Survey of London in 1598. In its heyday Ely Place was one of the most magnificent of London’s mansions.

Ely Place was a liberty which meant that it was exempt from local taxation and came under the jurisdiction of the Diocese of Ely. It was also a Sanctuary which meant that “persons pursued by law for certain offences could not be arrested by civil authorities”. Although the Bishop of Ely no longer lives in the area, an Act of Parliament, passed in 1842, established a group of commissioners whose responsibility was to maintain Ely Place and take responsibility for security there. It is still a private street today with beadles controlling egress who goes in and out and signs warn that you must obey the rules of the Commissioners of Ely Place.

But the street has changed immeasurably since the glory days of the Bishop of Ely’s Palace. Its gardens were renowned, particularly for their strawberries, the Duke of Gloucester commenting to the Bishop of Ely in Shakespeare’s Richard III, “when I was last in Holborn,/ I saw good strawberries in your garden there/ I do beseech you send for some of them”. Continuing a Shakespearean theme, John of Gaunt lived at Ely Place, after his Savoy palace on the Strand was destroyed during the Peasants’ Revolt in 1381, until his death in 1399.

By 1772 the Bishop’s Palace was in such a ruinous state that the only thing was to knock it down, which the Crown did when they bought the land from the Diocese that year. The townhouses that can be seen on either side of the street date from that era. Also dating from that era is Ye Old Mitre, now a Fuller’s pub, on the corner of Ely Place and Ely Court, although the original pub was built on the orders of Thomas Goodrich, Bishop of Ely, in 1546. As befits the quirky status of the street, alcohol licences were granted by Cambridge authorities until well into the 1960s.

London can be a quirky, disorientating place at times. 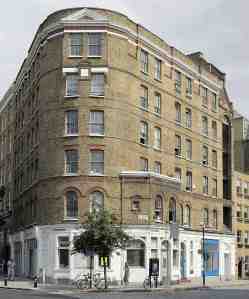 On the southern corner of Clerkenwell Road and St John’s Square to the west of St John Street stands a rather splendid building known as Penny Bank Chambers and to emphasise the point, above the entrance is a row of terracotta pennies with the bank’s name embossed on them. The Penny Bank was a Yorkshire creation, founded in 1859 in Halifax by Colonel Edward Akroyd, with the laudable aim of encouraging the working classes to save. They sought to do this by being sited on the main thoroughfares of towns and cities, opening in the evenings and accepting deposits of less than a shilling, hence the name.

Princess Christian of Schleswig Holstein, no less, laid the foundation stone to this particular building in May 1879 and it opened for business a year later. For her troubles, the princess received a commemorative trowel, inlaid with silver pennies and a figure of working man with a bank book. I’m sure she treasured it. There was an even more philanthropic idea behind the Clerkenwell branch.

The development of the Clerkenwell Road in 1879 saw the demolition of many of the slums in the area, creating a housing crisis. The upper floors of the Bank were to provide tenements for artisans “of regular employment”. Families of up to ten would occupy a living space comprising of up to three rooms and the expectation was that they would deposit any spare cash they had with the bank. Laudable as the idea may have been the scheme lasted barely ten years but it left its mark on the area and the internal design of the building. The National Penny Bank itself was wound up in 1914, although the Yorkshire element became the Yorkshire Bank.

Stepping into St John’s Square, you cannot fail to notice a large arch. This is pretty much all that remains of the priory of St John, the English headquarters of the Order of the Hospital of St John of Jerusalem, established in the area in around 1144, from which the square derives its name. Modern Clerkenwell Road bisects St John’s Square and from John Rocque’s map of London, produced in 1746, the Square was that area to the north of what is now Clerkenwell Road, the rest being noted as St John’s Court. The earliest reference to the Square appears in a deed from 1712.

A priory so close to London had its drawbacks. It was often in financial straits because it had to entertain the occasional visiting royal, associated courtiers, the Grand Prior, and a motley crew of pensioners. In 1381 it was set on fire by Watt Tyler’s revolting peasants and rebuilding was not completed until 1504, although the priory was usable enough to host the Royal Council in 1485 in which Richard III decided against marrying his niece, Elizabeth of York. The 1504 reconstruction included the grand south gate, although what we see today was almost completely rebuilt by the Victorians. The Elizabethan historian, William Camden, described as “a palace” with “a very fair church, and a tower-steeple raised to a great height, with so fine workmanship that it was a singular beauty and ornament to the city”. 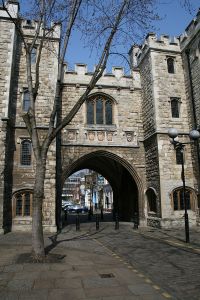 Despite its splendour, the priory fell foul of Henry VIII’s reformation, although it was one of the last monastic houses to be dissolved, in March 1540. It was then used to store the monarch’s tents and part of his wardrobe (he was a big man, after all) and royal builders had their master’s permission to loot it for building materials. On her accession the Catholic Mary allowed the Hospitallers to return to their erstwhile site but her death and the return to Protestantism meant that they were quickly expelled and the property repossessed.

Over time, the area was populated by the more genteel sorts but from the 18th century tradesmen moved in. There was a distillery, established by Israel Wilkes, the father of the radical politician, John, and, on the western side of the Square, a printing works, established in 1750 by John Emonson and, as Gilbert & Rivington’s, was still in business in the early 20th century.

With some careful observation and a vivid imagination, though, you can still imagine what the Priory might have looked like, even today. 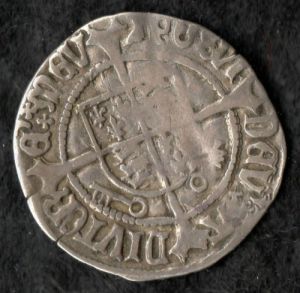 One of the great strengths of the English language is that it is dynamic and constantly evolving, acting like a sponge to absorb influences and words from other cultures and tongues. Even the most ardent logophile would be hard pressed to keep track on every word let alone find the opportunity to use them all. Inevitably, some words fall out of fashion and languish in ill-deserved obscurity. I see it as part of my mission to resurrect some of them and get them in front of a twenty-first century audience.

Take dandiprat. It is defined in Samuel Johnson’s magnificent but unreliable Dictionary of the English Language, published in 1755, as “a little fellow; an urchin: a word used sometimes in fondness, sometimes in contempt”. He even ventures a derivation of the term, from the French dandin. Randle Cotgrave in his bilingual dictionary of 1611, A Dictionarie of the French and English Tongues, defined dandin as “a noddie or a ninnie; a hoydon, sot, lobcocke; one that knows not how to looke, and gapes at everything he knows not.” In defining the French noun nambot, he wrote, “a dwarf, elfe, a dandiprat”. There is some circularity here, but Johnson does seem to have got the meaning of dandiprat right and possibly even the derivation.

But the word may have an earlier provenance, from the world of numismatics. The English economy hit hard times in the late 15th century to such an extent that the treasury was depleted, the church coffers had been empties and the poor workers and serfs were on their uppers. The king at the time, Henry VII, hit on the bright idea of adding a new silver coin to the coinage in circulation to the value of three halfpennies. The antiquarian, William Camden, noted in his Remaines of a Greater Worke Concerning Britain, published in 1605, that “K. Henry the Seuenth stamped a small coin called dandyprats”.

The coin barely lasted his reign but its more lasting legacy is to provide a word for something slight, insignificant and insubstantial. As a word, its hey day was the seventeenth century, appearing in Anthony Brewer’s Lingua or The Combat of the Five Senses for Superiority, from 1607: “the vile dandiprat will overlook the proudest of his acquaintances”; and in the Jacobean tragedy, The Virgin Martyr, written by Thomas Dekker and Philip Massinger in 1622, a play seen by Samuel Pepys in 1668; “the smug dandiparat smells us out, whatsoever we are doing”.

In 1650, the English physician, John Bulwer, used it in his Anthropometamorphosis; or The Artificial Changeling in a context that is suggestive of something slight and slender; “sometimes with lacings and with swaiths so straight./ for want of space we have a Dandiprat”. William Beloe’s Anecdotes of Literature and Scarce Books, published in 1814, it has the meaning of something with no value or consequence; “beware a rolling ey, which wayerynge thought make that,/ and for such stuffe passe not a Dandy Pratt”.

However, it is clear from a letter written by the Irish novelist, Maria Edgeworth, in April 1795 that Beloe’s usage was that of an antiquarian. Commenting on a book she had recently read, Edgeworth noted, “it is a scarce and very ingenious book; some of the phraseology is so much out of the present fashion, that it would make you smile: such as the synonym for a little man, a Dandiprat”.

Alas, dandiprat has never returned to present fashion but from starting out as the name of a small coin, it had a century in the sun, a useful portmanteau word to describe something small and insignificant. Time for a revival, methinks.