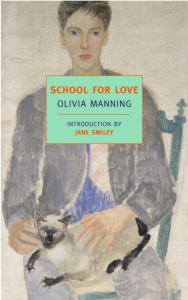 Olivia Manning again. Published in 1951, this book is based once more in the Levant, this time Jerusalem in 1945. The title is a loose paraphrase of a couplet from William Blake’s slightly odd poem about learning to recognise and experience a divine love that transcends race, The Little Black Boy; “and we are put on earth a little space/ that we may learn to bear the beams of love”. In essence, this book is about the coming of age of an orphaned boy, Felix Latimer, and his understanding of the ways of the world.

Felix was molly-coddled by his mother but when she died in Baghdad, his father had already been killed in action, he is packed off to Jerusalem to stay with an adopted aunt, Miss Bohun. We are put on our guard about Miss Bohum early on in the book when Felix recollects his mother’s unwillingness to have anything to do with her; “whenever his father had suggested a trip to Jerusalem, his mother had said: “Oh no, dear one, not there. We’d have to see Ethel Bohun. I couldn’t bear it””.

And a remarkable and unlovable creature she is. Having turned her home into a boarding house, she is a member of the Ever Readies, a Christian sect awaiting the second coming of Christ, she even leaves a bedroom spare in which to host the Host. A miser, taking more than her fair due from her guests, Miss Bohun makes herself out to be motivated by kindness and self-sacrificing, to boot. Highly sensitive, Miss Bohun is quick to see slights and plots against her in the most trivial incidents and when her dander is up, can be merciless in forcing her guests and employees out of the house.

We see Miss Bohun, and all the other characters, through the eyes of Felix, although the narrative is written in the third person, and his natural inclination, partly through naivete and partly because he is grateful for her charity, is to take her side. The boy’s perspective begins to change with the arrival of the more sophisticated Miss Ellis, at least to his eyes, who soon recognises what Miss Bohun is up to.

Her arrival adds tension to the household and by taking Felix under her wing, Mrs Ellis opens his eyes to the possibilities that things are not always quite what they seem at first sight. He begins to see that the world is not as certain as he once thought and that all the characters he encounters, even his saintly mother, have their flaws. The scales fall from his eyes and he sees Miss Bohun for what she is; “for a moment, seeing her sitting there calmly and running at will through the gamut of her tones of command, exasperation, self-pity and disapproval, he was suddenly certain of her falsity. His faith in her as a human being had gone and he could believe her to be capable of anything…”

The one constant rock in Felix’s small world is Miss Bohun’s Siamese cat, Faro, on whom he lavishes his love and believes that the feline in its own way reciprocates the feeling. Felix also feels pity for Mr Jewel, a somewhat mysterious character who is harshly treated by Miss Bohun until his circumstances change.

The book ends with Felix departing for England. It is not a book to read if you are looking for exquisite plotting or rip-roaring action. This is much more a well-written, occasionally amusing, sometimes witty, study into the human character and the rites of passage of a young man stranded in a strange land and devoid of the love and affection he once knew and craves.